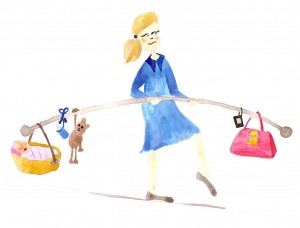 I know, I shouldn’t be saying this and rather be valuing the precious time I have left with little L as long as she is still in my tummy. And I feel awful enough about it. But I think I have had enough now.

Enough of sleepless nights, colostrum leaking breasts (don’t ask…) and water retention that give my legs the shape of Bavarian sausages. For the past nine months, everything that went past my lips has been carefully evaluated regarding its prenatal value. I forced myself to rest more and stress less. I am swallowing five different organic-vegan supplements twice a day. I even took up Yoga! Whilst little L will be considered full-term as of next Tuesday, I feel rather overripe. I want my body back. There, I said it.

After stuffing my face with M&Ms and wine gums all evening, I feel really sick. All I really wanted was a proper drink and a waistline. O.k., let’s be honest here. I want a few drinks, not just one. I want to drink from the tab of a little barrel straight from the fridge; I want to sing Turkish songs and dance with the curtain in Nina’s kitchen until the neighbours call the police. On a school night. Gosh, has this been me? Have I ever been that young and carefree?

The more I think about it, the more I get to the point that all my ‘I want my body back’ clamour is just a sign of what is going on in the back of my mind. All these question like ‘Will my baby like me? Am I going to be a good mum? How am I going to manage to still be myself, and not to loose myself in ‘just’ being a mum?’ add up in my head and keep me awake at nights. I am desperately looking for role models – mothers of grown up kids that managed to give their kids the attention they needed without forgetting to nurture their own personalities.

Being the child of an outspoken feminist and career woman, I know one extreme of the spectrum. Surely not a road I want to take. The other extreme – which for me is defined by replacing every bit that used to matter to yourself with what matters to your children and finally ends in self-abandonment and children being the only substance that describe your personality – seems not desirable to me either.

Even as a kid, I was petrified by the way some of my girlfriends spoke to their mums – with a total lack of respect and appreciation for the women that made their children the centre of their lives.

I know I am going to be dwelling on my baby and already feel rather anxious about letting anybody near her, let alone putting her in a nursery before she can speak for herself. I would not want to give her away as a baby, and I am thankful that I have the choice not to.

But where is the fine line? When is going back to work just selfish and when is it a necessity, for your own sake and for the relationship you want to have with your children?