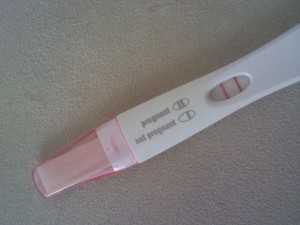 July is my favourite month. Not only are the market stalls laden with juicy strawberries and sweet melons, it is also the month of summer holidays, ice cream and BBQs. Oh, and it is my birthday in July, too.

While thinking of what to do this year, I was remembering last year’s birthday celebrations. All very well planned in secret by Big M to surprise me, the celebrations turned out to be a lot calmer than arranged for – the champagne remained unopened and the sushi untouched, as we were hit by an even bigger surprise just the day before.

When I went to see my gynaecologist earlier last year, I just wanted to make sure everything was alright. I didn’t expect anything out of the ordinary. Yes, my periods had been irregular or even completely absent – sometimes for more than three months. But I put it down to the fact that I had had a tough time and my lifestyle had been rather unbalanced – work hard play hard in the true sense of the word.

I had scans before. And I could tell straight away that something wasn’t quite right. My ovaries looked like someone had pointed a shotgun on them. The doctor asked me, if I knew what Polycystic Ovary Syndrome (PCOS) was.

I didn’t have a clue. Apparently, the ‘string of pearls’ was clearly visible on the screen. All those beautiful eggs that didn’t develop properly but remained as cysts around my ovaries. My doctor tried to calm me but basically told me not to have too high hopes becoming pregnant any time soon. ‘Give it a try for six months and then we’ll put you on hormones.’

There were so many thoughts rushing through my head. Would PCOS mean infertility for me, like for so many other women? Months and months of daily hormone injections? IVF? Adoption? Had I left it for too long? Had my previous lifestyle affected my ability to have a family of my own?

I was so shocked, I didn’t even cry at first. I remember staring at the wall of my shoebox sized hotel room in Zurich. The move to London was going to happen on the following day and the furniture had been picked up from the apartment already. Big M was in Sweden, and I was left alone with my thoughts. After more than a year of dividing our time between three countries, we decided to merge everything back together to where we met. Move back to London. Create a home. Get married. And start a family.

What if I couldn’t give that to Big M? Would our relationship survive the strain? Even if I couldn’t have children? Would it even be fair to drag him into that? Would he leave me, if I couldn’t give him the family he wanted? Looking back, this sounds a tad pathetic. But at this very moment, my fears felt as realistic as they could possibly be. And apparently, I wasn’t the only one concerned.

We decided to drop contraception completely. I didn’t want to take any chances any more. In my mind I tried to befriend the idea of never getting pregnant and started to design a plan B – not having children didn’t mean to have no meaning in life, right? 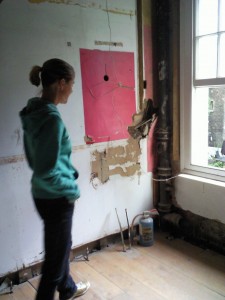 We found our dream home in London – or at least what had the potential to become our dream home. A 200-year-old Georgian townhouse that was rotten into tatters. Neither Big M nor I had the time to take on such a project, but being not necessarily happy with my job in the corporate world on the 19th floor, I decided to quit and renovate the house. I was looking for a new perspective in life anyway, and some change would only do me good.

Two months later, my period went missing again. All of a sudden, I was tired like never before, my breast were feeling tender and I felt sick – I had all the symptoms of an early pregnancy. Thrilled, I went to the pharmacy and got a pregnancy test. ‘It’s buy one get one free today’, said the grinning shop assistant and shoved another test into the paper bag. I am still wondering what’s so funny about it.

One fine line. Definitely only one. Not even the palest hint of a second line. My period arrived the next day. A little bit of wishful thinking and a lot of hormones playing havoc with your body still don’t make a pregnancy. I tried not to be too disappointed. I had enough other things to look forward to, and I decided not to let becoming pregnant or not take over my life.

The renovations on the house commenced, and Big M was spending less and less time in Sweden, but more in the cosy apartment we rented in West London. It felt so good to finally be together. The morning before my birthday, I was getting ready for yet another day on the building site. Rummaging around in my vanity case, the 2nd pregnancy test fell into my hands. It suddenly dawned on me that my period was late again. I unwrapped the little plastic stick, removed the cover and peed on the test strip. When two bright pink lines appeared in the control window, I screamed hysterically. I felt the blood rushing into my cheeks and remember thinking ‘this is impossible’.

When Big M finally put down the phone, I blurted out: ‘Have a seat, I need to talk to you!’ Rolling his eyes, he asked ‘Do you need money again?’ Slightly hurt – ok, the renovations turned out to be a little bit more expansive than planned – I pulled him down to sit next to me and showed him my little treasure. ‘I am pregnant’ I said, surprised by how strange the words sounded, coming out of my mouth.

To begin with, we were shocked. All the research we had done suggested to make oneself comfortable with the idea of LONG phases of trying to get pregnant, if getting pregnant naturally at all. We hadn’t done any homework regarding how it was to actually be pregnant, let alone having a baby. The first thing that became very clear to me was that morning sickness does not limit itself to the morning. But that’s a completely different story…