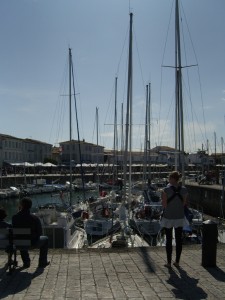 After merely 12 hours drive, we arrived on Ile de Re. Ah, Fance, finally France! The food, the weather, the language and: the misunderstandings. I love it!

Mme Cartau welcomed us at the apartment and was cheerfully greeted by Big M. ‘What a lucky lady you are, with such a name.’ Questioning expression on Mme’s face. ‘Named after a desert. Mrs Cake!’ Well, that would have been GATEAU. And no, Mme Cartau was not impressed.

Nevertheless, and for sure used to oh so funny foreigners abusing her name and her language, Mme showed big M around, while I was trying to wind down little L and get her to sleep. ‘Mme showed me where to put the garbage, they have a rommpommebelle here.’ ‘A what?’ I forced the words out, trying hard not to splutter all of my drink. ‘A rommpommebelle’ big M answered, not without being proud of his newly gained vocabulary. Apparently, Mme had mixed a little English with a little French and a lot of accent. Et voila: a room for garbage à la française.

Fortunately, little L and Big M were travelling with Met Mum, whose French wasn’t only fluent, but also deeply asleep. ‘Is the poubelle included?’ I asked the waitress at the restaurant. The poor girl looked at me, startled. ‘Quoi?’ I was thinking hard. Poubelle… Ouch! I had just asked the girl if she had included the rubbish in the bill. Must have been big M and his garbage room, getting me all confused. ‘Pourboire, I meant pourboire!’ 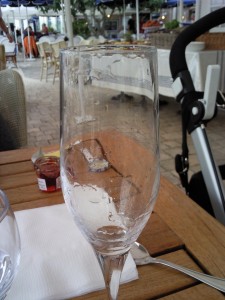 I finished my champagne and caught site of the fabric that was covering the buffet table. ‘La mer est bleue’ was written in dark blue letters on the white-waxed tablecloth. I chuckled. Translated through German into English (and ignoring a missing e on mer), it said ‘Mummy is drunk’. How did they know?

Met Mum is lost on vacation and kindly asks to excuse missing comments and the usual visits, as le weee-feee is not included in our humble accomodation.