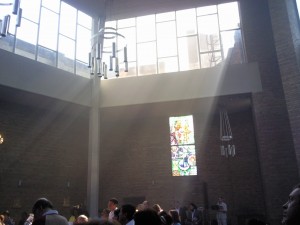 Last Sunday was seeing little L and me attending the Christening of L’s babyfriend T. On our way to the reception, one of the guests asked me, if I was going to have little L baptised. Answering the question herself, she said ‘Well, I guess it’s better to have them baptised at an early age.’

Is it? I am not quite so sure.

It’s been ages since I last saw a church from the inside. And against my initial concerns, I was positively surprised. The mass was quite pleasant, with the vicar joking about the bishop flipping butter to the ceiling as a kid at dinner parties. And the songs weren’t too dark either. Nothing of the usual ‘or you will all end in purgatory’ I know from the catholic masses I went to when I was a kid. They even had cake, tea and biscuits awaiting the faithful community at the end of the service.

Little L was showing her most angelic behaviour. She even made an attempt to hum – apparently she has a thing for organ music. They burnt incense after incense, and just when I thought ‘I am getting sick any second now’, little L threw up. All the way down my new silk top. And just when I had cleaned up the mess, she decided to give it a shot and fill up her nappy. I just about managed to suppress a ‘holy crap’.

The only thing I found quite disturbing was the firm opinion of the attendants – most of them childless – to have young children baptised. They were talking about baptism as if it was a routine vaccination against all evil. If you have your children baptised, you have to promise to raise them in the name of the church you chose for them. I wouldn’t be able to give that promise. Neither are most of the people I know. Nevertheless, their babies are baptised as if there’s no tomorrow.

Isn’t that hypocritical? Aren’t we mocking those who really do belief? What do you think?