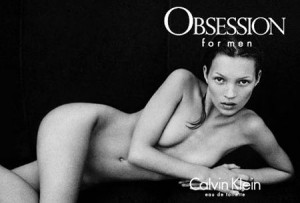 As if it wasn’t bad enough that women like Kate Moss count as rolemodels (may I quickly remind you: a love for publicly shoving coke up her nose, the heroin addicted boyfriend, frequently stumbling around town completely drunk), now she is even giving dieting advice. Of all the wrong kind.

In an interview with Women’s Wear Daily (WWD), Moss is reported to have said ‘Nothing tastes as good as skinny feels’, being asked about her mottos. The saying can be found on numerous pro-anorexia and bulimia websites.

Her agency now claims that this was taken out of context. But in which context would such a phrase look good?

Don’t get me wrong, I think she has a stunningly beautiful side to herself that is amazingly well preserved, given the hardcore lifestyle that she followed during the last two decades. Maybe exactly that lifestyle is to blame for such comments. Cocaine does not only decrease the need for food and sleep, it is known to potentially cause major brain damage.

It is absolute incomprehensible, how she could not realise what impact her words would have on young girls. This is particularly bizarre as she is mum to a seven-year-old girl herself.

In the past, Kate Moss has been famous for remaining silent and turning down interviews. Now, that’s a great motto, Kate!