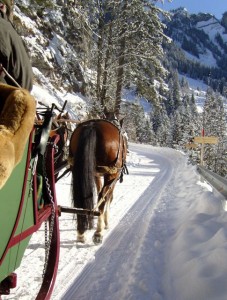 So it’s snowing again in London. Remember last year’s snow chaos? London went into freeze (literally) with no buses and no trains running during a few days. Just like thousands of other people, Big M got stuck on one of trains that were stranded somewhere in the middle of nowhere.

Ok, I admit it, this isn’t London in a snowy, sparkly dress in the picture above, but Switzerland. But wouldn’t it be nice to hop on a sleigh to get to work or take the kids to school? Gosh, how I miss Switzerland!