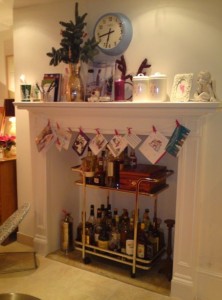 Way too little cards on display. Might need to send myself some cards

Finally, it’s the season of comfort and joy again. Time to go overboard on Christmas decorations, buy presents for family and friends, write Christmas cards and wish lists, sit together around the table and feast (have I mentioned that there will be the whole family sitting around our table this Sunday, hoping to be fed? shriek!) and, most importantly, bake Christmas biscuits. 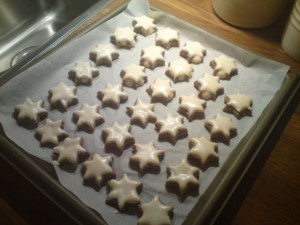 Christmas biscuits must be by far my absolute favourite Austrian/German Christmas tradition. To begin with and as a little warm up, I decided to start off with ‘Zimtsterne’, cinnamon stars.

To bake about 40 of these heavenly delights, you’ll need: 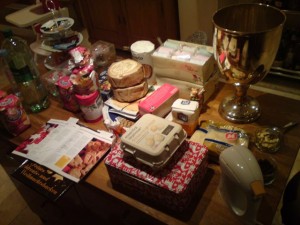 Beat egg whites until firm. Slowly mix in vanilla sugar and icing sugar. Save a cup full of the mixture in the fridge for later.

Mix the rest with almonds and cinnamon powder.

Preheat oven to 130°C (fan) and place baking paper on a tray.

Roll out the dough in between two sheets of baking paper, about 0.5-0.7mm thick. Dip star cookie cutter in cold water and place the cut out stars on the tray. 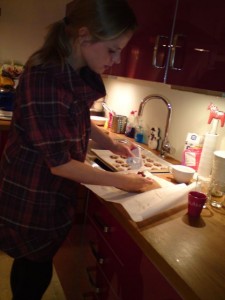 See the little red cup? The secret is in the Gloegg!

Take the egg white mixture from the fridge and spread onto the stars, either with a baking brush or a tablespoon (I place a little dot in the middle and slowly ‘draw’ it to the edges).

Place tray in the middle of the oven and bake stars between 20-25 minutes. The icing mustn’t go brown. Let them cool down completely before taking them off the tray. They tend to stick to the tray before completely cooled down. 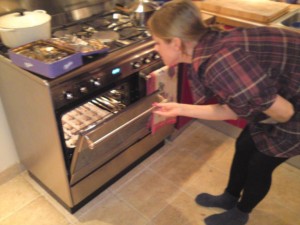 Don't go too close. You don't want to burn your nose. Again.

Baking is best accompanied by loud Christmassy music and a mug of Gloegg (Swedish mulled wine) or two.

Speaking of Swedish, time to get ready for Sunday. Lucia is coming…

For more continental European Christmas baking, head over to Mummy do that! and try her delicious Vanillekipferl (vanilla half moons).