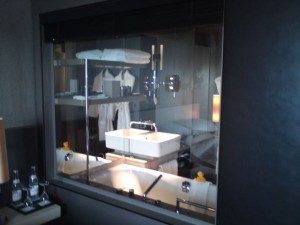 Bath tub with a view

The guy next to me on seat 11B kept on pushing my elbow off the armrest. Well, at least he tried. I was tempted to ask him if he knew how lucky he was. If it weren’t for my very generous husband, he’d be kicked off the armrest by a screaming 13-months-old.

It was only 24 hours before the plane took off that we changed our minds about the forthcoming trip to Munich. With British Airways on strike and little L still slightly unwell, Big M decided to stay home with the patient and sent me on my way. On my own.

Completely relaxed and sweat-less, I arrived at The Sofitel Munich Bayerpost and discovered that they upgraded me twice, resulting in a view over Munich’s roofs and a ‘wellness bathroom’. Read: deep bathtub from which you could watch TV, fluffy bathrobes and bite-size Hermès D’Orange Verte shampoos, lotions and potions.

With a pang of guilt and a sudden longing for my baby I called reception to have the cot removed from my room. This trip was not going to be a guilt trip!

The reason that got me to Munich in the first place was my friend Christelle’s 40th birthday. We met in 1996 when she moved from the French Provence to Germany, and since then she hasn’t changed much. In fact she still possesses energy levels of a young foal that are paired with Audrey Tautou looks and completed by a subtle French accent. 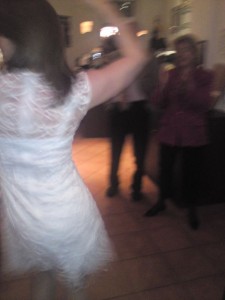 Of course, I couldn’t leave the party before the birthday girl. We danced until 3AM and until the owner of the restaurant turned the lights on.

When the phone rang the next morning at 10AM I vowed never to go out again.

I considered myself safe when I met Vesna, Thomas and their friends in a restaurant to watch FC Bayern lose against Milano that night. After all, everybody had kids and Vesna had promised their girls a cycling tour the next day. The atmosphere was relaxed and tame as iPhones were passed along the table, showing off baby pictures.

In reminiscence about the good old days, we decided to pay P1 a visit – the club we frequented with virtue before virtue included husbands and children. Unfortunately, the club is currently being renovated and inhabits a substitute location above the original venue. It’s been nothing like the old days; even the former manager must have thought so as he opened his own business just around the corner.

And there it was – an intimate atmosphere, familiar faces, great music and a doorman that knew how to keep it intimate. A restaurant and bar during the day, the club’s tables are being pushed to the sides to make room for nighthawks and owls to spread their wings. 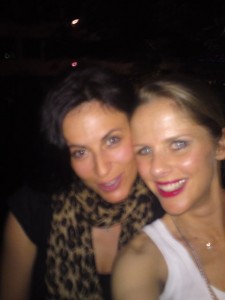 The concept is all a bit London’s Aura, Floridita or even Favela Chic. But quite a new thing for Munich, I reckon. And so I listened in awe and oohed and aahed to manger Klaus’ words. Who was I to rain on his parade? Plus, he did an excellent job. Or would we have stayed until 3AM otherwise? 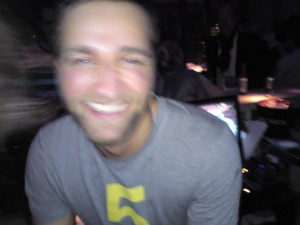 ‘Hey, haven’t you been Miss Serbia…’

Vesna’s energy levels for sure had been spurred on by the DJ who remembered her being the winner of a Miss Serbia contest. About 15 years ago. Not that she had changed a lot, but this guy must have had a serious crush on her at some point.

To my personal delight, I was chatted up by a 27-year-old with the fetching pick-up line ‘are these Hello Kitty plasters on your feet’? Answered with ‘yes, I bought them for my daughter’, any potential sexual tension between us evaporated like a quickly deflating balloon. The thing I learned about me: should I ever be single again, the way forward was becoming a cougar. Young boys are so cute! 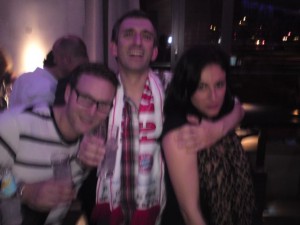 In the wee hours

On the way from the elevator to my hotel room, I kicked of my Louboutins and winced. I cannot even remember a day when my feet had been imprisoned on high heels for more than 18 hours.

With hurting feet, a major hangover and über happy I woke up the next morning at 11AM. Thankfully, I left my inner clock in London and was wonderfully detached from the mummy-schedule.

I am still floating on a cloud of happiness about the people in my life. Sometimes, life is so good, it makes me want to scream.

Nina, I am so sad we didn’t see each other. I hope the vomiting stopped by now and that you are all on the mend. D x