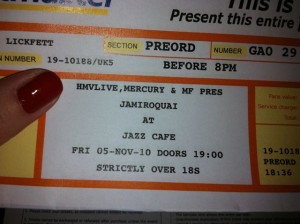 I can honestly say that there is no other band like Jamiroquai that I have worshipped with the same kind of enthusiasm and loyalty throughout the years. 18 years, to be exact. Naturally, a major chunk of my life’s soundtrack* is courtesy of Jay Kay and band.

I had seen Jamiroquai live three times already – twice at gigantic venues and once at a party at the rather small Park Lane Hotel in London. Just try and imagine my joy when I found out I had won tickets to see him live last night at the teeny tiny Jazz Cafe in Camden. 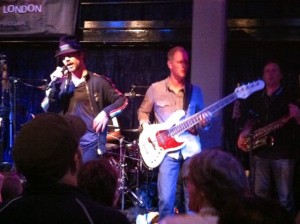 In genuine Rockstar attitude, I upped the Nurofen doses, snorted some anti-congestant and washed down the bitter aftertaste with a large glass of white wine. Quite the rebel, I know.

What can I say? I am feeling like shit today, but it’s been worth it a million times. The atmosphere was more than cosy, with no more than 300 people celebrating the return of this awesome band. I am, again, completely blown away by how amazing Jamiroquai are live. 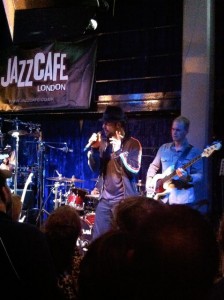 I like that there are real musicians with real instruments on stage, I like that the lead singer can actually sing and that the lyrics are self-written and clever. I like that Jay Kay lights a cigarette or two during a gig and I like his slightly un-PC heart-on-the-sleeve approach.

*little L isn’t called little L for no reason. Cosmic Girl will always remind me of poor Thomas who used to play (and sing, urgh) it to me, not realising that I wasn’t cosmic at all but just a bit off. You give me something is the only Jamiroquai track I can’t bear listening to, as it was the track my ex chose to win me back after leaving me for his intern. And Talullah is the song that I listened to when I finally boarded a plane and left him.

Tell me. Where were you?