For some strange reason my husband loves the fact that I am not entirely lost when it comes to technology. He has taken to calling me Technologiewunderchen, which translates into little tech miracle (and is completely exaggerated). When Nokia asked if I wanted to test their latest smartphone N8, Big M was therefore more than excited and pointed out that I had not done a tech review ever since the Wiki Digital Camera, which had gotten me into all sorts of tech fail troubles. I was set on declining, but Big M’s sad face made me give the tech reviewing business another chance. 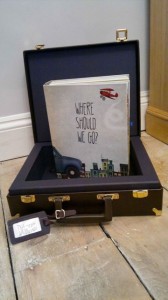 It turned out that Nokia pulled out all the stops, sending a gigantic box from New York via Fedex. It was soon revealed that the phone’s extravagant packaging was to blame for weight and size. Maybe Big M was right and this might be a fun product to test after all.

The casing is nice, solid and has a matt black finish. It is not as stylish as an iPhone, but feels solid and up to the pressures of everyday MetMum life.

The camera is amazing. At 12 Mega Pixel it is better than many small compact cameras. The set up is easy, the flash strong.

There is a built-in sat nav, which you will only get into an iPhone by buying an app (e.g. TomTom app for ca. £60). The sat nave works a treat; you can link it with Lonely Planet, TripAdvisor etc. A quirky but cool feature is that there are lots of different voice packs to choose from, i.e. you get to choose the style of guidance, there is anything from a sexy Australian guy, a Drill Sargent to a 5-year-old girl. Luckily my car has sat nav, and for walking around the iPhone Google Maps integration is sufficient. But if you are looking for a sat nav phone this might be great.

The phone comes with lots of cables and syncs with a Mac. Since I love my MacBook Pro I could not live with a phone that doesn’t. The synchronization works well, but takes a bit of time to set up. You need iSync, which any Mac has, and a (free) plug in from Nokia’s site. You also need a separate Nokia Multimedia Transfer programme, which is also free on Nokia’s site. So it is a bit of a palaver and takes some determination, but once it is set up it works well.

The not so good stuff

The interface and interface design seems surprisingly old school. Especially the pre-installed browser feels like something from the DOS days sort off early 80s. There is a progress bar and a KB count down that make you feel like you have to do a bit of programming yourself. 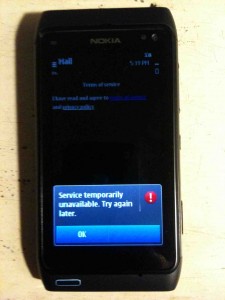 The phone locks itself and crashes. I was expecting that if anything the Nokia would be the fastest and most stable phone around, given Nokia’s background. It is not. I never really understood what I did to make it crash, but it did and showed cryptic error messages at that. iPhones used to do a bit of that but I found my iPhone 4 to be much more stable than the N8.

Anything web is difficult. The standard browser is very poor, the way it displays my blog is terrible, everything looks small, hard to read and unattractive. It is not surprising that iPhone users are online so much more than all other smartphone users. Downloading the Opera Mobile Browser made the experience much better, but still not on par with the iPhone browser experience.

Nokia’s App Shop is sadly enough still much poorer than Apple’s and Androids App shop. There are some very quirky African and Asian Applications – probably because of the popularity of Nokia and Symbian (the phones’ operating system) phones. I use Apps for two reasons a) to keep little L entertained b) for a choice of Twitter, Facebook and Skype Apps. On both counts the Nokia’s App store could not compete. 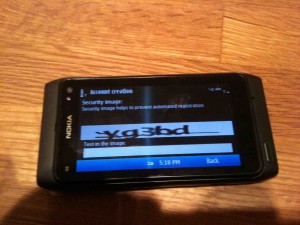 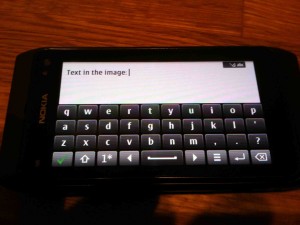 In general, the phone could be smarter. Many functions require many more clicks than necessary, I will not bore you with details, but other phones show how about 30% of all the clicks on the phone should not be necessary. A funny example of the lack in user friendliness is that the sign up to a Nokia account uses a charking. The problem is that the input box and the picture are on two separate pages making it a bit of a brain training to put in the right combination.

Other little annoying things: I have downloaded a Absolute radios App to be able to listen to the radio on the phone, but rather than fade out as soon as something else happens on the phone this app keeps playing. I therefore managed to listen to Tears for Fears on Absolute Radio and speak to a guy calling from HSBC at the same time.

So, Nokia N8, you have not won me over. In my verdict, I am joining the Nokia shareholders and say: try harder, Nokia!

If you want to give the N8 a try (especially if you are looking for a great camera and/or sat nav), leave a comment and enter the giveaway draw by 9 March 2011. The phone has been very gently used during the course of two weeks only.