When my husband asked me last summer what I wanted for my birthday, I mentioned a golden Michael Kors watch and an evening clutch. Generous and lovely as he is, Big M set out to get me both. Also, adventurous as he is, he chose a Michael Kors clutch that didn’t have my previous seal of approval. Unfortunately, it turned out not to be my cup of tea.

‘Not a problem,’ Big M said and took the brand new clutch back to the store. ‘A problem indeed,’ said the snooty store manager at the New Bond Street store and refused to give Big M a refund. They also refused to give him a gift voucher and instead sent Big M home with a credit note. Which upset Big M slightly, because instead of giving me a nicely wrapped present, he had to hand me a flimsily printed ticket, stating the price of the unwanted clutch.

‘Not a problem,’ I said and took the credit note back to the store, knowing that I would find something else I’d like. The lady I chatted to was perfectly nice, however, I couldn’t find anything I liked and/or that was within the limits of the credit note. Michael Kors Bond Street only stocks the catwalk collection, i.e. jumpers for £800 and more. And as I didn’t want a watch (remember, I had got one for my birthday) or a pair of sunglasses, there was nothing left for me to choose from.

‘Not a problem,’ I thought, and told the lovely lady I would go to the Regent Street store instead. ‘Uhm… no,’ said the lady. ‘That’s impossible.’ And this is where Michael Kors terrible customer service becomes really bad: you can only redeem credit notes in the store you bought the item from in the first place. Why? Because it’s company policy! Oh, and the credit note expires within six months, which only left me with about one months to use it.

Not happy with being forced into spending a pile of cash on something I neither wanted nor needed, I took to twitter. 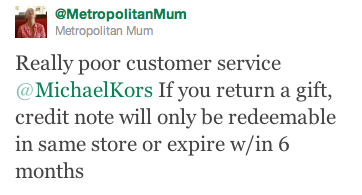 And next happened… nothing! More than that, after looking for my own tweets and naively assuming they must have missed them, I discovered the following:

In 2011 alone, I have bought two pairs of shoes (one of them was on sale), a watch and a clutch from Michael Kors, which should give me the status of a valued customer. Apparently, not in the eyes of Michal Kors.

Metropolitan Mum on Google Plus